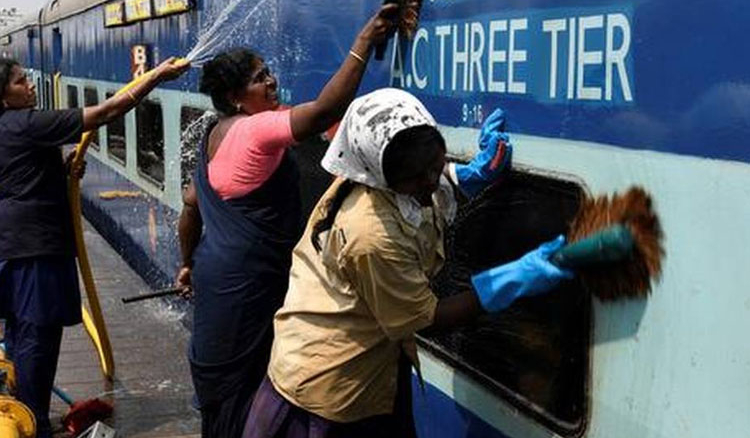 To begin with, the coaches, including toilets, are cleaned at both the starting point and the destination, and that includes mechanized cleaning. The national transporter carries out special cleanliness drives and awareness campaigns from time to time to make the passengers travelling in the trains more aware of the benefits of keeping the train coaches clean.

The railways provided Onboard Housekeeping Service (OBHS) in nearly 1090 pairs of trains including Rajdhani, Shatabdi, and other important long distance Mail/Express trains for cleaning of coach toilets, doorways, aisles and passenger compartments during the run of the trains. The ‘Coach Mitra’ service has been provided in around 1050 pairs of OBHS trains as a single-window interface to register coach related requirements of passengers such as cleaning, disinfestation, linen, train lighting, air conditioning and watering of coaches.

Railways also started the Clean Train Station (CTS) scheme and it has also been prescribed for limited mechanized cleaning attention to identified trains including cleaning of toilets during their scheduled stoppages en route to nominated stations. In a bid for better waste management, Railways has started to provide dustbins in non-AC coaches whereas previously the service was only available in AC coaches. The Railways carry out a frequent pest and rodent control of coaches by authorised professional agencies.Prime Minister Narendra Modi’s launched the Swachh Bharat campaign in 2014 under which a lot of emphasis was given to cleanliness.