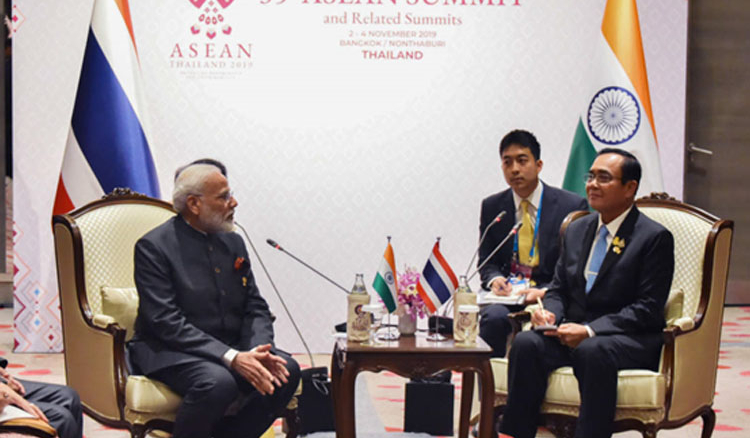 Prime Minister Narendra Modi on Sunday held bilateral meetings in Bangkok, with the top leadership of Indonesia, Thailand and Myanmar, which are the three strategically-located maritime neighbours of India.The bilateral meetings were held on the side-lines of the 35th India-ASEAN summit.

During the meeting, PM Modi and his Thai counterpart Prayut Chan-o-cha agreed to explore opportunities for cooperation in the defence industries noting the enhanced engagement in defence and security fields., the External Affairs Ministry said.“India and Thailand are close maritime neighbours having historical and cultural linkages. In the contemporary context, India’s Act East’ policy is complimented by Thailand’s Look West’ policy which has made the relationship deep, robust and multifaceted,” the Ministry of External Affairs said.

Both Prime Ministers welcomed the start of a direct flight between Bangkok and Guwahati and also finalised agreements for cooperation between Ranong Port, Thailand and Indian ports in Kolkata, Chennai, and Visakhapatnam. The leaders also exchanged views on regional and multilateral issues of mutual interest.

In their talks, Modi and Indonesian President Joko Widodo laid emphasis on the commitment to work together for peace, security and prosperity in the Indo-Pacific region, besides resolving to work closely to deal with threats of terrorism. Modi conveyed that as the world’s two largest democracies, India is committed to work with Indonesia to strengthen ties in the areas of defence, security, connectivity, trade and investment. He also invited Indonesian companies to invest in India.Prime Minister Narendra Modi also met Myanmar’s State Counsellor Aung San Suu Kyi cordially exchanged views on extending cooperation between the two countries.

They also discussed other issues including cementing Other issues including strengthening bilateral relations, trade, transport, operation of the Sittwe Port, demarcation of the remaining part of the common border between Myanmar and India, upgrading of a female police training school in Yamethin, capacity-building for public servants, and human resources development as well.